A working group is a group of Tampa DSA members working together on a specific topic or issue.

Working group meetings are held once a month. Meetings are typically held in libraries or virtually on Zoom (COVID-19 update)– check our upcoming events  or the calendar on our homepage here for dates, location, and time. 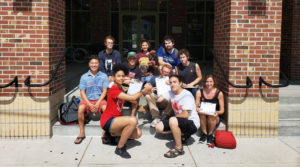 The Healthcare working group is dedicated to advocating for health care as a human right with a class analysis. As socialists, we advocate first for the elimination of a profit-driven private insurance industry, to be replaced by public funding of health care through greater taxation of the top income earners. This would ensure accessible and free care to all, including those most marginalized and devalued by capitalism. Approximately 45,000 annual deaths are associated with lack of health insurance in the United States, and medical bills account for about 50% of all personal bankruptcies (75% of which had health insurance at the onset of illness or injury.) Under capitalism, the basic human right of health care is rationed to the upper class, which translates effectively to a right to life; for persons over 50 years old, the life expectancy of the top 20% income earners is 13 years longer than the life expectancy of the bottom 20% income earners.

The Electoral Working Group is formed to engage in political action in an effort to reorganize society and the economy along democratic socialist lines. We recognize that the current political system at all levels; local, state and national, maintains the interest of capital as the prime objective at the expense of the interest working class, the poor, racial, sexual and religious minorities, the undocumented and the vast majority of those living with the U.S. borders. One of the most insidious lies of neoliberalism is that we can have a politics void of ideology. That politics prostrates itself before the desires of capital is treated as a natural fact like gravity. That the only place political disagreement can take place is at the fringes where no threat can be made to the status quo is assumed. The fact that what is considered the left wing party in this country adheres to this notion while the far-right and the neoliberals themselves pay it no mind should only serve to hasten our efforts. We reject this prescription and assert to organize ourselves politically around an ideology focused on class struggle.

We recognize that, at its heart, our political struggle is not spiritual or cultural; rather it must be focused on improving the material conditions of the people. Our political action must be focused on this goal while fighting to dismantle the concentration of wealth and power that create the conditions where health care, housing and food are not 100% guaranteed conditions of life. Neoliberalism seeks to commodify and privatize all aspects of human life and so as socialists we must support actions which seek to reverse this process.

We recognize that democracy is a tactic as much as it is a goal. We must build radically democratic structures and flatten hierarchical systems wherever possible. We must reflect the society we wish to create. We must operate in an open democratic fashion and have mechanisms for members to address failures in this area.

The main mission of the Electoral Working Group is to take political action to improve material conditions for the vast majority and to increase democratic and open participation in this struggle. While our ultimate goal is a fundamental reorganization of the political, economic and social system, we are mindful that there are many small steps along the path to this goal. Therefore, we must build coalitions with diverse partners, and use a diverse set of tactics to take the steps necessary to fulfill our stated mission and to reach our ultimate goal.